Let’s go a little bit off-topic for this post… I have got an e-mail from a blog reader with questions about other things (than the winter market) to experience in northern Sweden. I could give a whole lot of suggestions, but what I would really recommend is that you check out the new “Arctic Lifestyle Magazine” (click link to read the magazine online). The magazine, issued by Swedish Lapland, is a great starting point for finding beautiful places to go and exciting things to see. 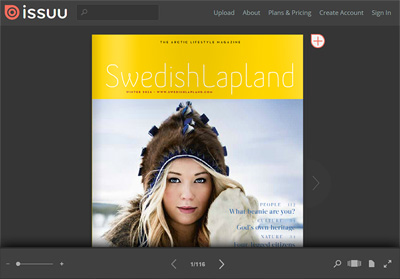 After reading the magazine, I am sure that it can be really useful and interesting to everyone who is planning (or even just dreaming about) a trip to Jokkmokk and other municipalities in the northernmost part of Sweden. SwedishLapland.com is also a great site, especially through the sub-sections for the different destinations that Swedish Lapland inclosed. For example: http://www.swedishlapland.com/jokkmokk/.

Update: There is also a great article in the December 2015 edition (#83) of Scan Magazine. The theme is “Winter wonderland”, and it includes articles from Jokkmokk (pages 44-45) as well as from neighbouring municipalities.

At Ájtte, the official mountain and Sami museum of Sweden, one would normally need a full day to see and experience everything that the museum offers. And during the winter market when the museum has a lot of visitors, it is basically impossible to experience everything in a single day. When I worked in the tourist information during the summer of 2015, I asked visitors how much time they had spent at the museum – and the two most common answers were “half a day” and “a full day”. So, I didn’t even try to make a full walkthrough of the museum.

Instead, I focused on the temporary exhibitions. The one exhibition that people appeared to be most interested in was all about knitted mittens, made according to old patterns that follow local traditions with a long history. For me, growing up with a pair of “Porjus mittens” and a pair of “Lovikka mittens” (which have both been made from the patterns that date back to the early 20th century), it was interesting to learn more about the history of the pattern. I also got a chance to speak with Erika Nordvall Falck, the collector and enthusiast behind the exhibition, about details regarding the Porjus glove. I didn’t expect a set of knitted mittens to be a fascinating experience, but it sure was.

The mitten exhibition will be open at the Ájtte museum until early March, 2016.

One visitor I talked to on Friday told me that she was surprised by the incredible colors of northern Sweden. She had come here, thinking that the snow is always white and the dark nights makes everything pitch black. She did not expect things like the “blue hour”, which happens early afternoons in the winter when the blue sky gives everything a blue hue, or the beautiful orange sunrises just to give two examples. Once again, the theme for the 2016 winter market was “Midwinter at the Arctic Circle”, and amazing colors come along with the season and the location.

With that said, I want to share a couple of black and white photos that leave out the winter colors. Inspired by large-format photographer Vahid Cullsberg (whose photos can be seen in this post), I got curious about working without colors. Here are some of the photos: 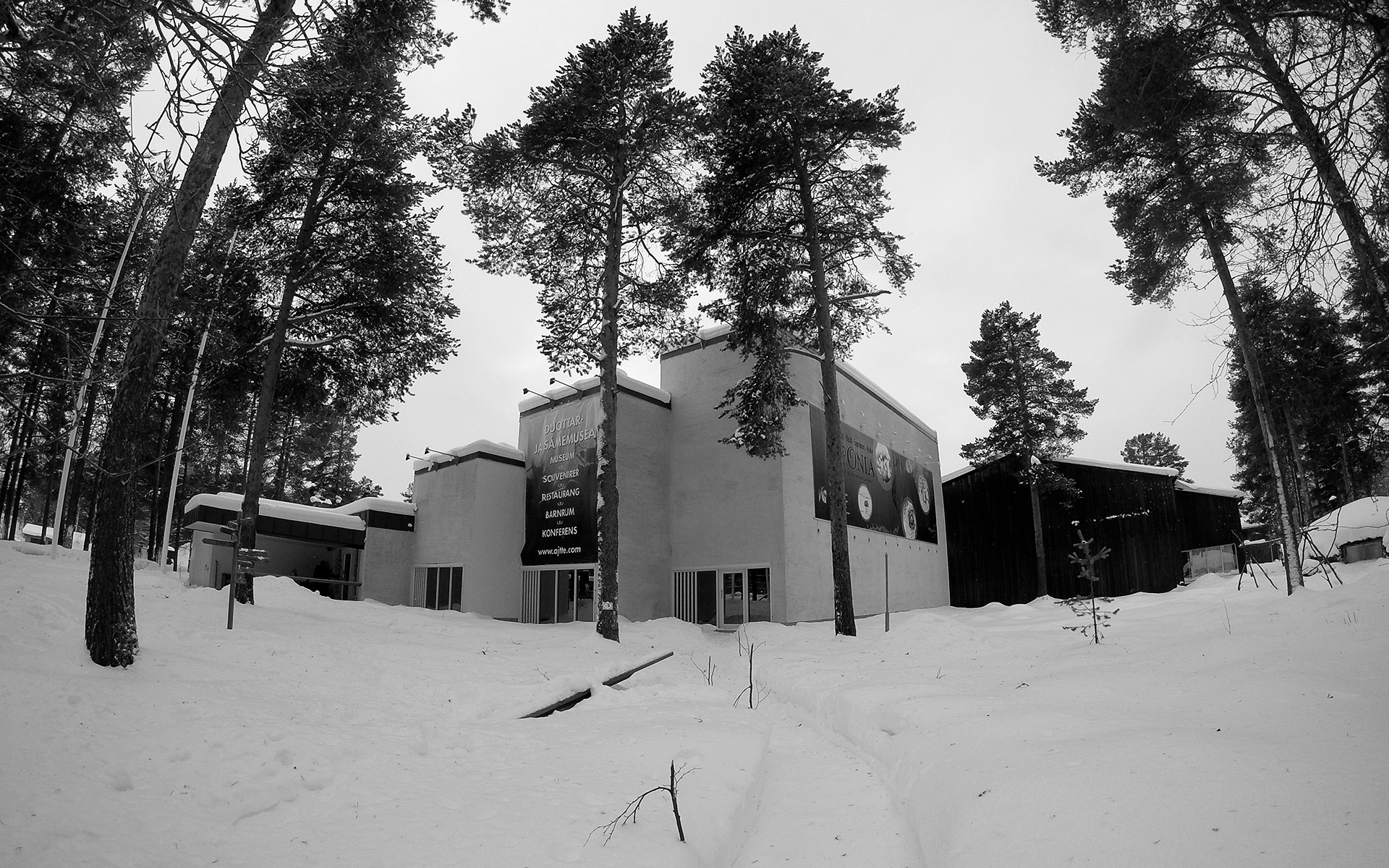 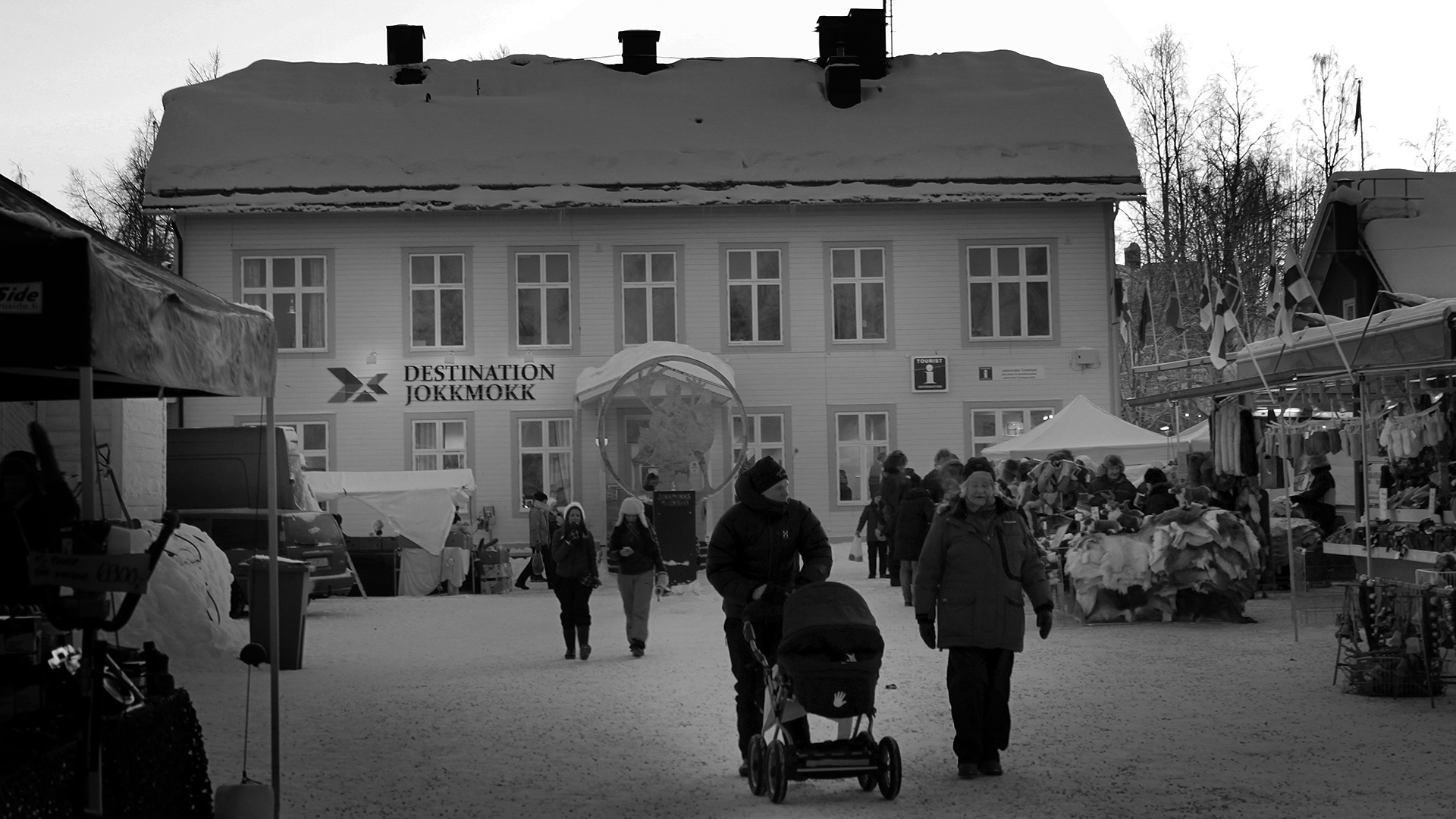 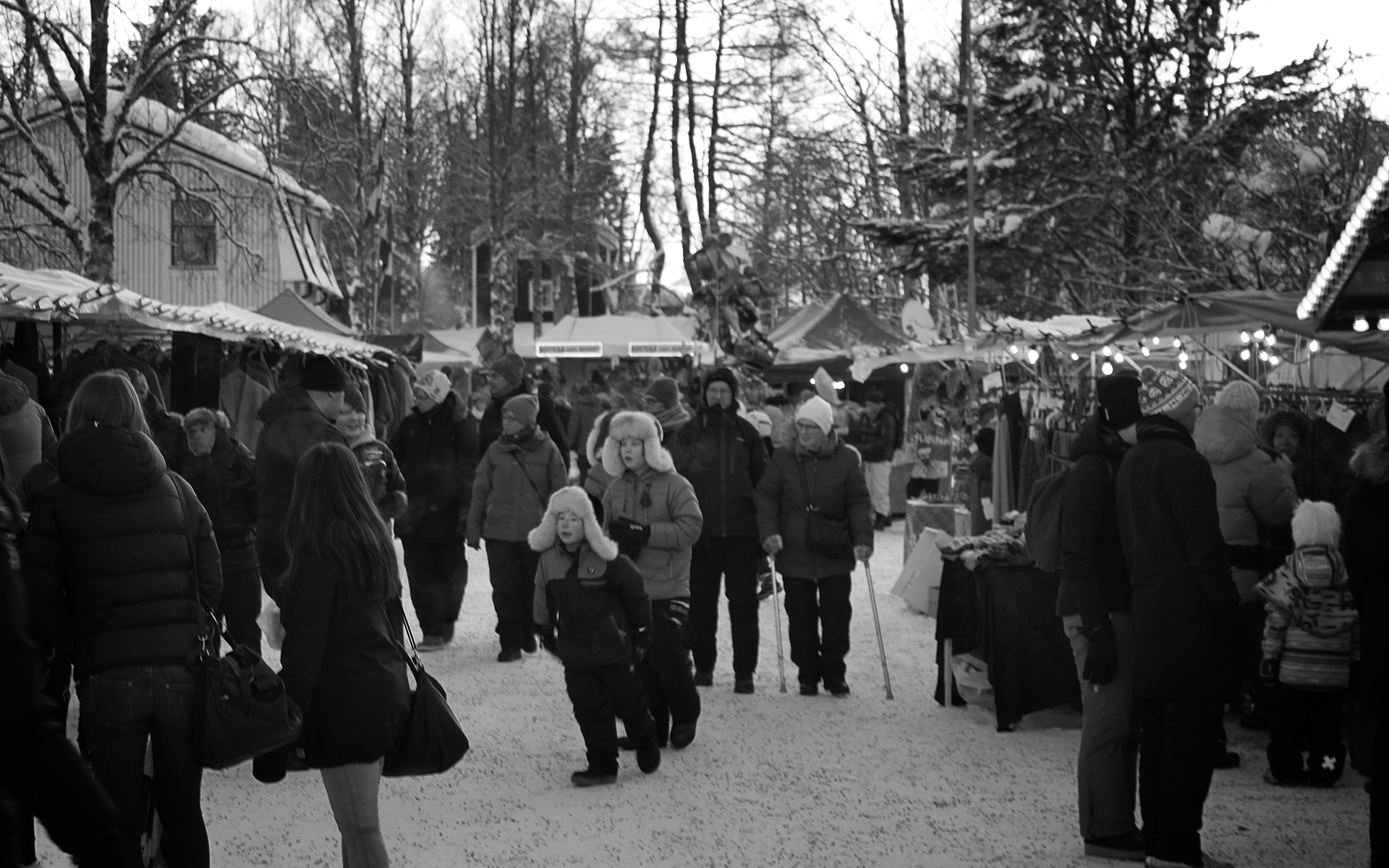 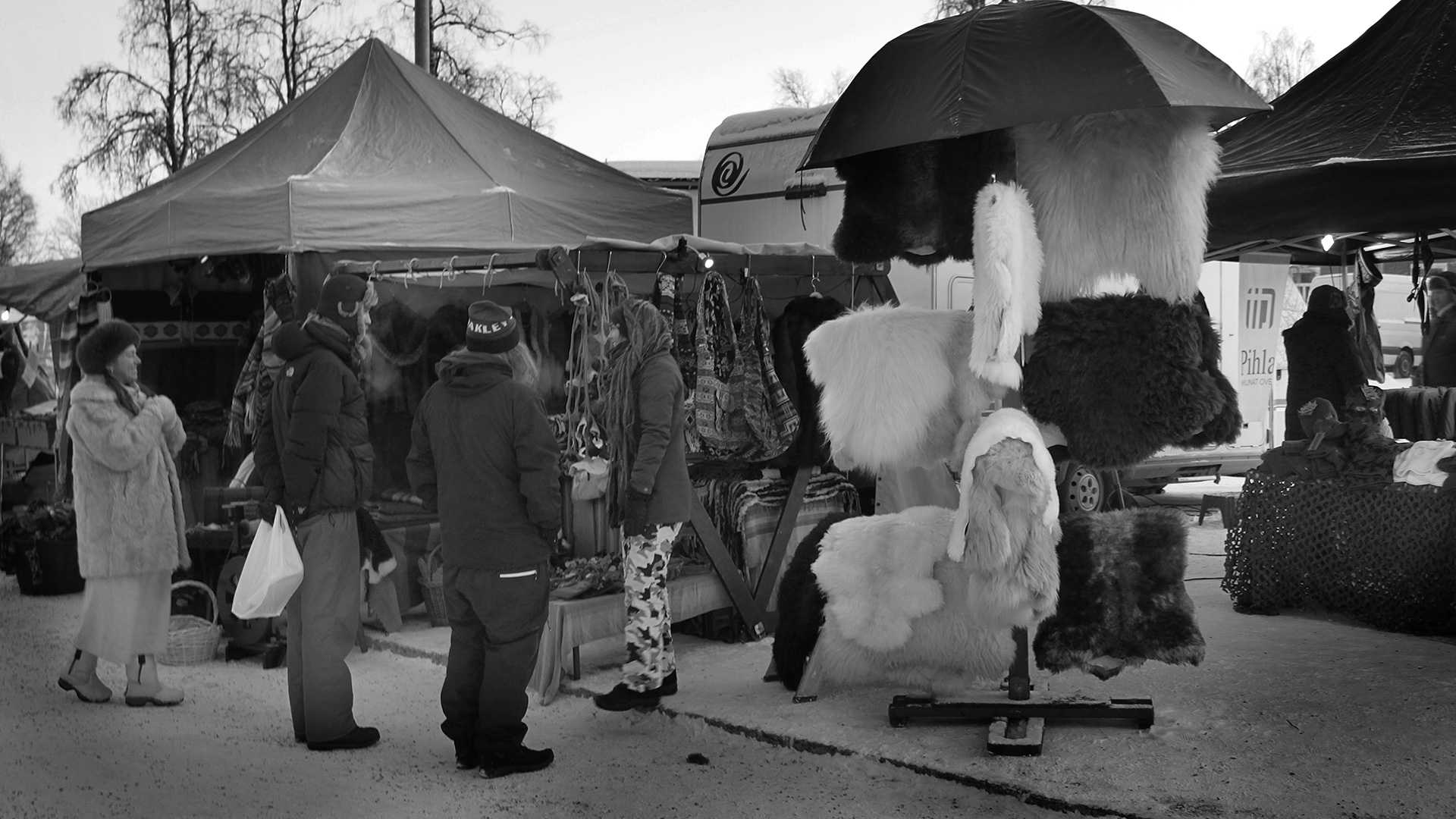 Filmed on Storgatan, the main street of Jokkmokk, shortly after lunchtime on Saturday, February 6th, 2016. I have a lot of video material, as well as a good set of photos that has not been sorted yet. Not to forget: stories and experiences that I want to write down and share with everyone who is interested in Jokkokk and the winter market.

A million untold stories – Let’s share a few of them!

For example: Australian ambassador Gerald, who won the reindeer race yesterday, has given an interview with Swedish newspaper Expressen where he reveals that he didn’t know that he had been signed up as a parciticipant in the race. The same surprise was given to a New York Times journalist who competed in the very same day (although she fell off the sled and was disqualified).

“What I like the most about the winter market? I’d say meeting all kinds of amazing people…”

Another example: I got a phone call from a woman who was (since many years) involved in a project I had just finished. She lives in southern Sweden and has not had very much to do with Jokkmokk in the last couple of decades – but after talking to each other for a while she realized that I was the son of one of her classmates from her first year in School in the mid-1960’s. And of course the story behind throat singer and life wanderer Björn Uglem, who has shared his photos from the Saturday reindeer race in a previous post. And all the randomg meetings with people who I would never sit down and have long discussions with if it wasn’t for the winter market where random meetings with people from all over the world often become long-lived memories. One such meeting was with a young (and very drunk) man, who knocked on my office door on Saturday night, asking for help with charging his mobile phone battery. In most cases, I would not have opened the office door if I was working late, but during the winter market everyone do their best to help people in need – and this random meeting ended up creating a lot of fun. 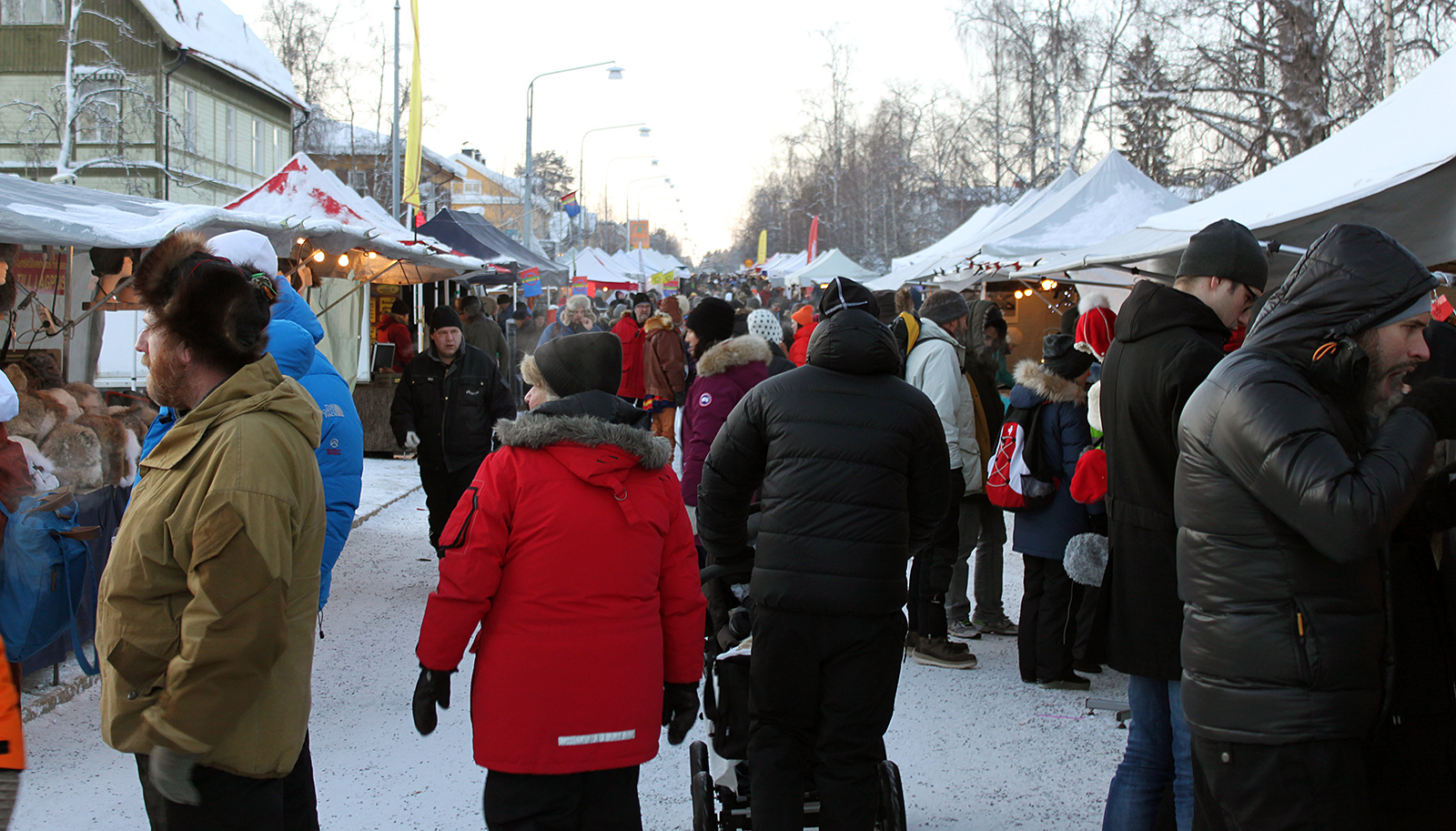 It is impossible to write down even half of all the things I would want to write about, but I will make sure to tell you atleast some of the stories. Not because the stories are interesting or entertaining, but because they are relevant to the topic; The winter market is a very special situation where you will meet a lot of different people – and the welcoming and helpful atmosphere (which I would say is, and has always been, one of the core values of the winter market) will leave many of the visitors – as well as locals – with great memories. Once again, and it can’t be said in any better way, it is one of the things that the market is all about.

Expect a number of follow-up posts during the next couple of days. If you have a winter market story of your own (or a photo, video or any other kind of material) that you would like to share, please get in touch. I’d be happy to post it here! 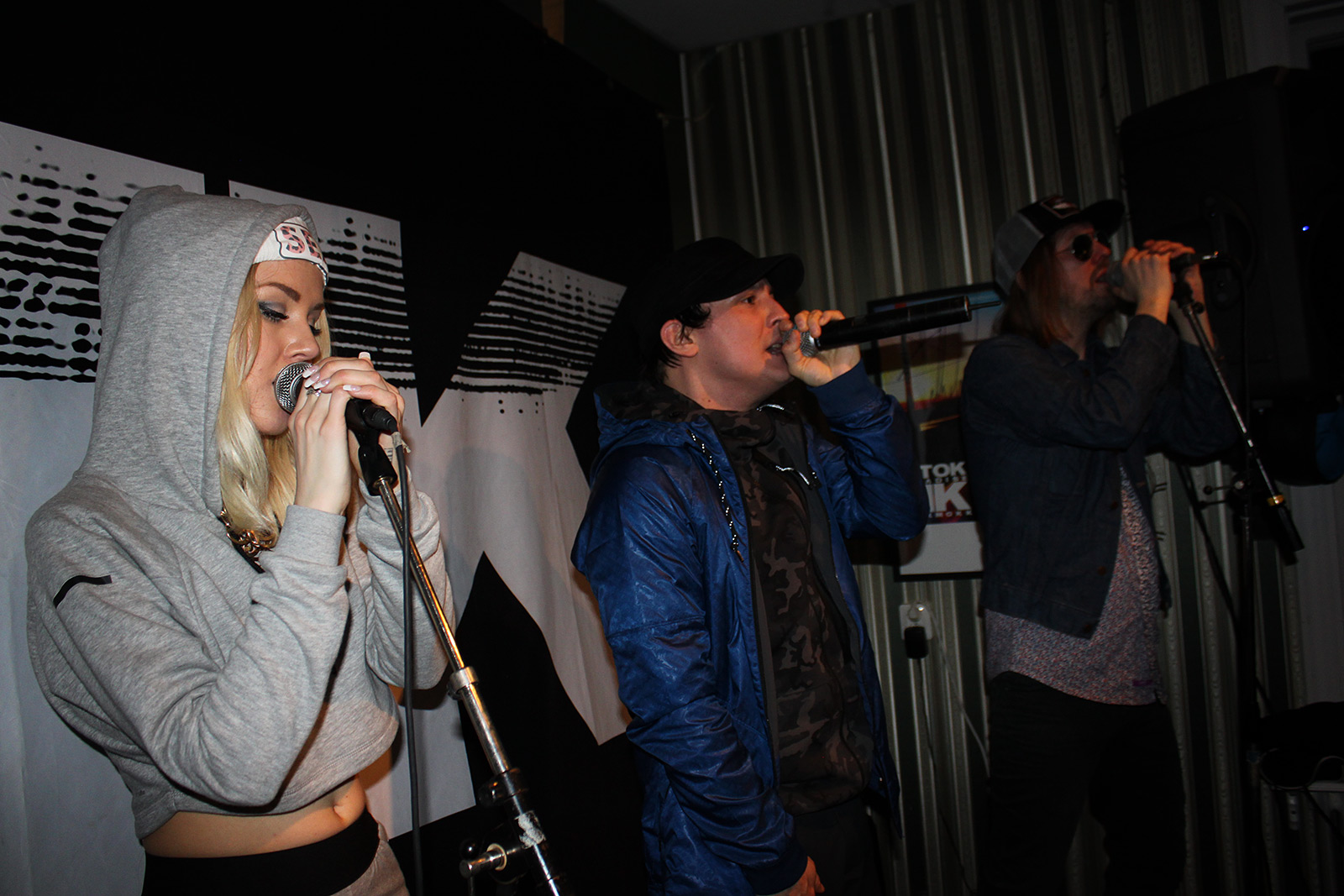 On the last day of the Jokkmokk winter market of 2016, Kitok returned to Jokkmokk for a one-night performance at Café Gasskas. As expected, the café was filled to the limit, and the atmosphere was electric. Yet another great hometown gig by Kitok, and a perfect end to a very nice winter market week. The gig started half an hour later than planned,

Watch two of the songs, “Halleluja” and latest single “Norrsken i baren”, in the videos below:

I managed to film one of my two races today, using a GoPro Hero 4 Silver camera that I held in my hand (as opposed to having it mounted on my head, as I did last year). The result was a shaky video where snow constantly hits the camera. It is a different kind of video from the ones filmed last year, but it is more faithful to the actual experience that a participant gets. Watch it here, and if you like it, feel free to share the link to this post (or to the video) with friends!

The street market part of the winter market is over for this time. I did some last-minute shopping (chocolate, salmon, reindeer chips and a suovas roll), and went down to the Ájtte museum to meet some friends. Photos from the museum will be posted next, but there is no time to edit the photos now; I’m just about to go to Hotel Akerlund for a winter market dinner together with my wife Johanna.

The last reindeer race for this year had a great mix of participants, including visitors from New York (a journalist for the New York Times), Germany and Australia, as well as locals. Four qualifying races, two semifinals and one final – and then we had a winner. I won my qualification race against Konstantin Tönnies from Germany and got to race against Gerald Bruce Thompson (the Australian ambassador to Sweden) in the semifinal. Mr. Thompson won the semifinal easily. He then won over Robin Holmbom in the final race, and was awarded with a reindeer horn trophy. When asked for a quick comment on his reindeer racing experience, Mr. Thompson concluded that he was happy about his participation.

Updated: I got a set of photos taken during the event today, by Björn Uglem. Thanks, Björn!

Streets filled with people, snow falling from the sky, people speaking in more languages than I was able to count and a reindeer race that turned out well. In short, the first part of the last day of the 2016 winter market in Jokkmokk has been great. Here is a big photo album from the day so far:

Coming next: Photos from the reindeer race!

Today is Saturday, February 6th 2016, and it is the last day of the 2016 Jokkmokk winter market. Atleast when it comes to the street market; many of the exhibitions will still be open after the market closes. The weather is good, although with cloudy skies and snow. The temperature is -12 degrees Celsius.

After having left the camera (and its memory card) at the office yesterday, I have lots of material to publish today. I’ll do it whenever I get a break in the busy schedule, but first of all I’m going to visit the market area and the snow stage where the Sami National Day is celebrated today. At 14:00, I will participate in the reindeer race – competing in the first round against a visitor from Germany.

Here are some photos from earlier: